Cadillac is a puzzle/card game hybrid that uses the rules of poker. It was only released in Japan on February 2, 1990.

Cadillac is a match-three card/puzzle game hybrid released by Hect first for the Japanese Famicom and later for the PlayStation. It uses a five by five grid in which the player must position playing cards in order to create sets of three, which are then removed.

The game uses a casino theme, with the game grid resembling a green felt poker table. The game also features bunny girls in its interstitial menus.

To earn the most money, the player has to deal and place every card in the deck in such a way that as few as possible remain at the end: each remaining card penalizes the player by 50 points (here depicted as dollars, to fit the casino theme).

The game will end early if a card lands on a column that is already full, thereby falling out of bounds. 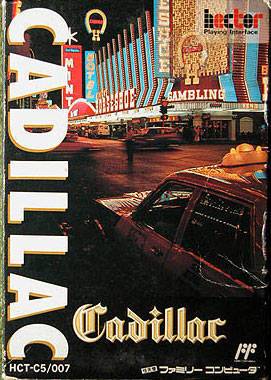